From the Journal of the Experiment with Light

The Experiment and Bereavement

On 2 January this year, my husband Martin died suddenly of a massive heart attack while on a gentle cycle ride with two Friends. He had seemed to be recovering well after being resuscitated following a cardiac arrest, then undergoing heart bypass surgery, two years before. But the diabetes which he had managed well for over twelve years had been getting worse in the months just before his death and had probably helped to cause it.

Martin and I had been attending our local Light group at High Flatts for almost six years, and had come to value its feeling of peace, and space to wait in the Light, as well as the friendship that came from worshipping and sharing together. We had felt upheld by the group, and supported, sometimes guided, by the Light, during the meditation. In those last two years Martin’s spiritual life went to new depths, and during the meditation he was even more focused than before on discovering what he was being led to do during whatever time remained to him.

Bereavement has taken me also to new depths in Light group meetings. There has been a greater sense of calm and thankfulness even than before, some sort of awareness of Martin’s presence in a place that was familiar and important to him, and a more intense feeling of being held in the Light by the group. I have also had the experience of helping to uphold others in the group, two Friends whose husbands had also died, in their bereavement, Jan’s before Martin died (she herself died soon after Martin), and Jay’s a few months afterwards. Jay, like me, has felt strongly upheld by our fellow-Experimenters, and the whole group has I think been drawn even closer together at these times. 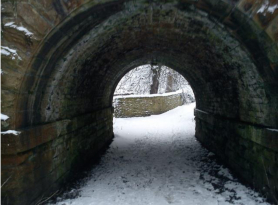 I have always felt – and now feel more intensely - the onward movement of the meditation, leading me to face the truth, however dark it may be, but then feeling the power of the Light

carrying me forward in faith and hope. I am made aware of “all that is out of the Light”, but then urged to “look over the confusions at the Light that discovers them”, and follow its leadings: “In the Light walk, and ye will shine”. During the summer,we have begun to use the Retreat Version of the meditation (adapted by Helen Meads from a version by Klaus Huber), and certain phrases in it bring out this movement still more powerfully: first the well-known words, “Be still and cool in thine own mind and spirit from thine own thoughts” invite me to stand back from my jumble of thoughts and face up to what is happening; then, later on in the meditation, “you will find grace and strength” offers support in making my way onward.

This awareness of both dark- ness and light fits in well with the roller coaster ride of bereavement, the alternating and sometimes simultaneous feelings of grief and loss alongside acceptance and glimmers of hope.

A few extracts from my notes written during our times for solitary reflection after the meditation may give examples of both aspects. During the months immediately following Martin’s death, my responses are mainly positive: though I note that I don’t believe in life after death in any conventional sense, I do have a sense of “something of Martin’s spirit being left behind” and of his love and inspiration supporting and encouraging others to “continue what he began”, in our family and in his projects, particularly sustainability and Quaker Voluntary Action’s working retreats. I do, however, refer to my “roller coaster ride” of feelings, suggesting that I could feel quite differently soon after the Light group meeting, though adding “it was good to be here and to have that experience”.

In more recent months I have been more ready to face the darkness. “Feeling more unsettled this time...less sense of Martin’s presence. Flashbacks to last week” (a holiday spent with family in Gloucestershire) “and the beautiful moments we shared, though awareness of the two levels” (of enjoying the moment on one level, yet always the sense behind it of sadness and even guilt that Martin could not be there to share it).

“Facing up to feeling older, more aware of eyesight and arthritic problems, now that Martin isn’t here – he helped and shielded me and in a way made them seem less of a problem” (we could laugh together at ageing and ailments) “Knowledge that I must choose my own way now.”

“Feeling down on the grey day of our 41st anniversary and in the days afterwards - more tearful now - feeling things might now get worse.”

In facing the darkness, I have perhaps felt more ready to let the Light lead me forward. In seeking to “choose my own way”, I was reminded of a recent “dream of the coffee shop” (I had dreamt I had moved to another town, but felt ignored by the locals when I went to a nearby coffee shop) “which brought home to me more clearly that this isn’t the time to change” (that I need to stay in familiar surroundings, with my network of support and friendship).

At a later date, I felt “the Light reminding me how Martin and I had learnt to treasure each day, particularly during these last two years, and how I’ll find it helpful to continue to do that, to treasure the good moments, for instance being with Reuben” (our new grandchild) and his parents” (despite those feelings of sadness and guilt), “taking each day as it comes, just getting through the difficult times – yet again struck by the phrase ‘grace and strength’, which gives a feeling of confidence and of being supported.”

I am still on my roller coaster ride. Though perhaps the roller coaster is moving a little more slowly, I expect the ride will continue. Sitting with my own thoughts, and with my journaling, is helping me; but perhaps the most powerful support comes from being upheld by my Light group, and waiting in the Light for leadings.

Articles, images and artwork in this journal are copyright to the authors, makers and photographers. 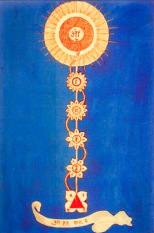